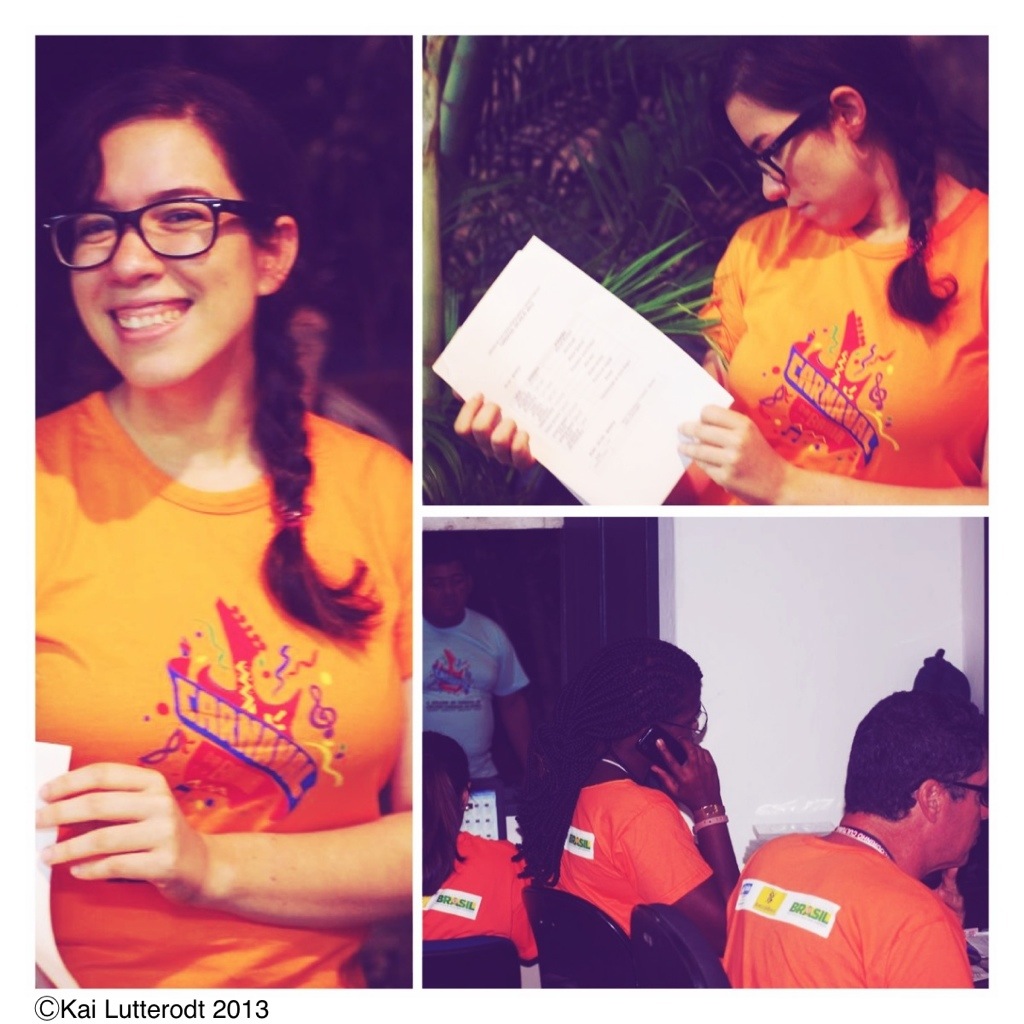 The carnival in Salvador is in full swing! In every corner of Salvador’s historic centre – Pelourinho, lurks something captivating for the camera… And that’s before any of the parades have begun!

So it goes without saying, I was thankful to discover a press centre for journalist to ‘recharge’ not just the batteries for their equipment, but themselves, in the middle of the Pelourinho! The staff were super hospitable which shouldn’t come as a surprise; this is Bahia after all!

I took the opportunity to have chat with staff member Maira Araújo over some guarana soft drink and canapés being served to staff. She gave her fingers a rest from tweeting, as she filled me in on the carnival in the Pelourinho circuit, the power of social media, and how I just may be the most unexpected person to enter their building! Happy Carnival!

What is you job title and what does it entail?

I’m a social media coordinator for the Secretary of Culture of Bahia. Me and my team post on Twitter, Facebook and Instagram all the information regarding the parts of Carnival that the Secretary funds; Pelourinho, “Ouro Negro” (the Afro Blocos), and the Carnival Pipoca, which are some blocos that go in the regular circuits of Campo Grande and Barra.

What tips would you give for ‘hyping up’ events through social media. Which social media site is your favourite and why?

People like to see themselves! So we focus a lot in doing “profiles” of folks that are enjoying Carnival in their own way; like tourists that come here for the first time, families that come all together to celebrate, people that work during the festivities, the beer can collectors, shoemakers, acarajé vendors, etc. I think Facebook is the one our public in general prefers, but I enjoy the simplicity of Twitter.

How effective would you say social media is in interacting people? What part has it played with this years carnival?

I think nowadays it is one of the most effective ways of connecting with the audience. The public finally have a voice, they can criticise, praise, share, etc. It’s a big change! Imagine that a few years ago the only sources for any kind of news were concentrated in the papers and in the TV, all run by such a small group of people. Now, anyone can have a blog, a twitter account, a facebook page, and make the news themselves, even getting it before any other big news enterprise. For Carnival, it’s a very effective way to share a content that’s not very easily posted in the regular media, like the afro blocos and the Carnival at Pelourinho, we are getting a very good response from the public.

How does Carnival this years compare to other years?

I guess we are at a point in which the Carnival public is getting tired of the “same old, same old” and we are seeing some changes. We could see some Blocos with big stars like Chiclete com Banana going without cords (the cords separate the people that payed a bunch of money to be there from the people that are not paying a penny, the “pipocas”, it’s a symbol of segregation that is totally off with what Carnival is all about: uniting people). Oh, and Pelourinho has being pretty awesome, I haven’t seen it this full in a very long time!

Has there been a steady flow of media using the press centre? Which which cities/countries have they come from? Which has been the most unexpected representation?

We’ve had some reporters from local newspapers at the press center in Pelourinho, and I guess the most unexpected was probably you! 🙂

What’s next after the carnival?

We have a saying that the year in Salvador only starts after Carnival, so I hope 2013 turns out an amazing year!

For information on the Salvador Carnival checkout these websites! www.carnaval.ba.gov.br
www.cultura.ba.gov.br
www.facebook.com/secultba
www.twitter.com/secultba.
Oh, and they’re also on instagram, you can have a taste of what’s going on here at www.instagram.com/secultba